This is why Apple Stores are overloaded. I have 254 items like this. No explanation, no hints on fixing it.

PS. In this particular case it looks like iTunes and iPhone supported .mp4 audio, but iCloud does not. Long ago I ripped these and the software did .mp4.

I found the on drive files and used quicktime player to export as .m4a — a lossless transform that strips out the some of the .mp4 wrapper. Then I deleted originals in iTunes and added these back in.

iPhone aggravation: apps don't appear in Settings:Cellular until they actually use cellular data

Apple could have displayed all iPhone apps in settings:cellular whether or not the app uses any data. Then we could disable cellular data access without having to first use data.

They didn’t. Apps only show up there after they use cellular data.

This is really annoying when trying to stay under the data cap of #2’s $40/year mobile plan. It also confuses the heck out of customers.

I don’t think this will get fixed those. Apple’s technical debt fix list is deeper than Valles Marineris. 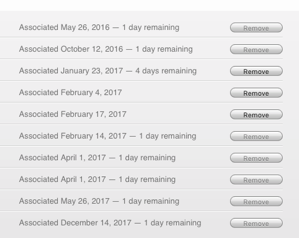 This is one heck of a time saver. Didn’t realize Google Docs allowed this.

I’m far from a WordPress expert. I’m not even a WordPress fan — it’s too complex and powerful for what I do. That complexity means it is also very vulnerable to attack.

So take what I write here with some doubt.

As best I can tell the default Dreamhost One-Click installation of WordPress has an error. At least it did for me. My hpmtb.org site was giving 404 errors. I installed the Redirection plugin and it wasn’t doing anything.

A blog post had a fix that worked for me. I used Transmit for macOS to open the install folders .htaccess file and added this code:

The 404 error is gone now and I suspect the Redirection plugin will work if I need it. I have a hunch that using “pretty permalinks” (not the default of “id=“) might also fix this file — based on some documentation here:

WordPress uses this file to manipulate how Apache serves files from its root directory, and subdirectories thereof. Most notably, WP modifies this file to be able to handle pretty permalinks.

This page may be used to restore a corrupted .htaccess file (e.g. a misbehaving plugin).

Did I mention that WordPress is too complicated?