I used the iPhone 3G Front Panel Assembly from iFixit $70) to successfully replace a broken 3G iPhone screen. I followed the iFixit assembly directions, watched a video for a related procedure and improvised when both omitted critical steps.

I recommend finding someone who's done this before and paying them to fix your phone. Or see how much you call sell the broken phone for, the buyers will easily fix it. Or buy a 3G display assembly instead ($100) and avoid about 30% of the repair hassle.

I did not attempt the $40 front panel procedure. iFixit rates that as "difficult". In English this translates to "impossible".

Lastly you can pay Apple $200 and they'll do a perfect job. Keep in mind that a new 4G iPhone costs about $700 out of contract and a new working 3G is probably worth at least $350.

If you do proceed consider also replacing the battery at the same time. About half of the hardest steps are common.

I hope by this time you've stopped, but perhaps you're already committed. Or maybe you want to make a business out of this. That would make sense, especially for someone in college where broken iPhones must be common. Here's what I learned (this supplements, but does not replace, the video and the ifixit directions)

Here's what I laid out. I was able to make up for the parts I didn't order, I had an old spudger that was fine. I think the screws are all the same but I had a different bowl for each and a picture of the step behind each bowl. The tweezers and compressed air were essential. The white paper is sticker backing to hold the cursed black tape removed during the procedure. I wish I had had a magnifying glass, but I'm 51. A bright light source should suffice for the under 40 crowd.

It took me about 2.5 hours to do this with several breaks when I ran into problems. An expert could do it in under 20 minutes. 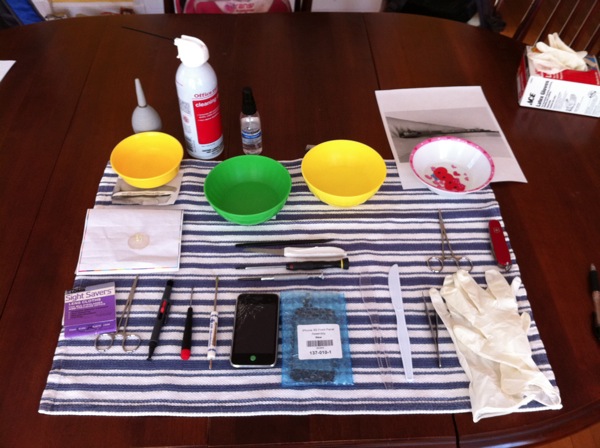 Read the directions very carefully several times and watch the video for the similar but harder front panel assembly. This is what they left out:

As of 1/2011 there is a key image missing from the assemblydirections at "step 6". if you haven't done this before you will have NO idea what is meant by the "PFC lock"

I have tried to capture it below, but I should have used a macro lens. It is that small. The PFC lock is a 1mm x 3-4 mm white bar that sits over the distal end of cable 3 as it emerges from a black connector cover. It is shown here in the unlocked, upright position. A simple flick of the plastic spudger will flip it up. Then cable 3 will slide out. 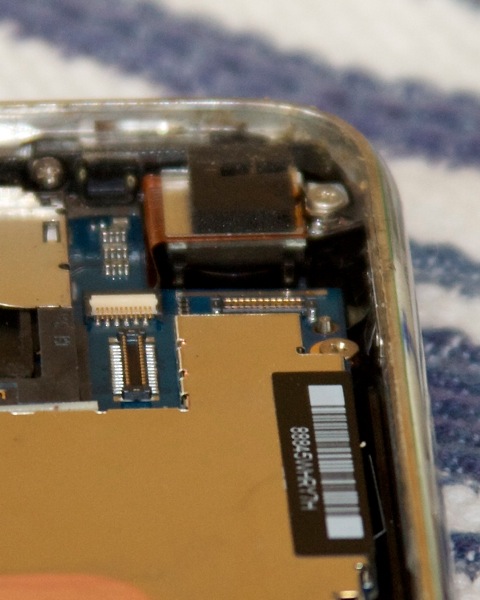 To reinsert cable 3 I suggest using fine tweezers on the black cable sheath to push it into the black housing above until the white line on PFC cable is about at the proximal side of the black cable cover. Then flip the PFC lock down.