I really think Tinderbox ($250!) should have said something about this earlier ...

Tinderbox: The Tool For Notes

.... Tinderbox shares notes with with Simplenote for Web and iPhone access...

The big (Big) problem with apps like Tinderbox, Evernote, or MindManager and its kin is data freedom. Specifically, the absence of data freedom. There's no standard for the representation of attributes and relationships in a nodes and arcs graph app -- it's a fundamental knowledge representation problem [1][2]. Years of rich data get flushed away when an app dies.

When, not if. All software dies. Ask Lotus Agenda users. Or the users of, and this is far from a complete list, Ecco Professional, InfoCentral, PackRat, Sidekick, Arrange (Common Knowledge - MacOS), InfoDepot, In Control, Cross-Ties, Palm Notes, Commence, Ascend, Arcadia (OS/2!), GrandView and MORE, Inspiration, Outlook Notes, and so many, many, many more.

Assyrian clay tablets from the library of Ashurbanipal have endured for thousands of years, my GrandView notes didn't do so well.

Data can outlive software -- but only if it's portable. Not forever of course, but maybe until the end of civilization [3]. JPEG images are in the running, video not so much. UTF-8 text files are serious contenders.

The SimpleNote ecosystem is based on UTF-8 text and RTF files with optional markdown formatting. That's why I like it - the core data store can endure. It's accessible from iOS device, OS X, XP, W7, Dropbox [4] web -- everywhere.

Still, notes alone, even with tagging and search, are not enough. I want a way to layer arcs upon the text nodes.

I could almost do it using MindNode Pro. I could attach SimpleNote notes to MindNode nodes and keep both MindNode file and SimpleNote files on Dropbox. Problem is, it's awkward to attach and create files to MN nodes. The icons are too large and the node doesn't inherit the file name -- and I need a keyboard shortcut to create an external text file on demand. 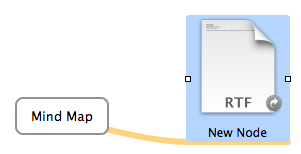 Doesn't that text icon seem a bit big to you? It can be resized, but it always defaults to enormous.

I haven't given up hope that Markus Muller will accept my suggestions, but I'm reluctantly leaving MindNode Pro on the shelf while I watch where he goes with it.

Tinderbox though -- if it could actually use SimpleNote ... and if it could become Dropbox compatible ... and if I'm careful about how I manage and distribute Tinderbox specific metadata ... That's interesting. It's a heck of a lot of money though, and I fear using its full power would put me into deep data lock.

Update: MaysonicWrites points us to Dave Winer's World Outline project, I think as an example of a liberated data solution to managing some kinds of information.

[1] Consider HL7 RIM 3 and the challenges of CDA/SNOMED model integration. Ok, so nobody knows what I mean by that. Trust me, it's relevant.
[2] Ok. There is a standard. It's called the hyperlink and HTML. This post is long enough, but I'm tempted to look for late 1990s book on hypertext I have somewhere, and to summon a BYTE article on a hypertext version of Gopher from the 1990s. I suppose software archeology is a hobby now. I am disappointed that we don't have wiki-like personal information tool that uses HTML/RTF/text and hyperlink as the information store, WordPress API as an authoring option, and the ability to migrate the repository from local drive to cloud.
[3] Outrageous you say! What could last that long? Well, yes.
[4] I'm a late adopter, but increasingly a fan.

Take a look at what Dave Winer is doing with his World Outliner and "Blorkmate". It seems to be getting close to what you're looking for, and Dave is a big anti-fan of corporate data silos.

Dropbox is great but by far not the only available service and its security issues are legendary, i.e., I cannot use Dropbox for my any work-related data. Let me decide where in the cloud I want to store my data and how I like to sync it. The data format used has to be sync compatible, not Dropbox compatible.

Speaking of Tinderbox, are any usage numbers known? The pricing is just insane.

I never expected dropbox or trusted it, so I don't feel as burned as many.

I don't know how many tinderbox users there are. I bet it's a very stick app though! They've been in business a very long time.

When Apple dropped their s/w prices I thought others would follow. Not yet!