Samsung SSD 840 EVO has a slow read bug: information on the fix

Over a year ago I switched my 2009 iMac from yet another dead hard drive to a Samsung EVO 840 1TB SSD. It was a calculated gamble that has worked fairly well so far, but SSD technology has proved less mature that I’d thought (Maybe this is why Apple has been slow to transition). For example, the net is full of contradictory recommendations on TRIM use. For another, the Anandtech coverage of this complex bug ends with “None of the big SSD manufacturers have been able to avoid widespread bugs”

Recently Samsung admitted they had a problem with slow reads — something I’ve been wondering about. They’ve put out  Windows fix and a bootable DOS version that’s supposed to work on a Mac.

I haven’t tried it yet, but I’ve assembled my references…

Thanks to Conrad’s Chavez’s generous blog post I feel ready to do this - once again I appreciate the CD drive in my old iMac. After BOTH of my backup systems are completely current of course. Actually, maybe I’ll do a 3rd back up just in case.

Wow. I did the fix and the speed improvement of my 1.5 yo SSD is amazing. I’d noticed some operations were slow, but the gradual decline hid how bad things were. Startup time is maybe 2-10% of what it was.

I think extremely slow reads on something related to directory structure were causing my Time Machine/Time Capsule restore failures (more on that in the post, later). 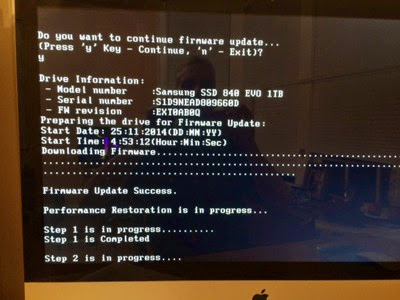