I described this problem in a series of Apple Discussion posts, but I’ll summarize here. I think it’s the related to the problem that’s described in a Verge article from 10/9 (despite Apple marketing in the 6s is not actually GSM carrier neutral). I also bought an unlocked iPhone from Apple.

Shortly before a trip (as usual!) I found I couldn’t do Call Forwarding (Settings:Phones) on my relatively new iPhone 6. Instead of getting a number I could edit, I saw the display “loading…”. If I deleted the text I could enter a number, but it didn’t really work. If I played around a bit I could generate an Oops! error message. Around the same time I discovered WiFi calling wasn’t working despite new AT&T support; initially it seemed to be available but I got yet another “Oops!”: “We can’t turn on Wi-Fi calling for your account. Think this message is a mistake ..” Call Waiting wasn’t working either.

I don’t know if the call forwarding was a new problem, I don’t use it very much. I found that other phones on our family account could forward. I called AT&T and the rep hadn’t heard of the problem, but based on a tip from Apple Discussions I asked for a new SIM card. Turns out they can send these by mail.

That fixed everything. I suspect the SIM activation process updated my AT&T config data correctly. I’m not sure how I activated my iPhone 6 — I might have put my 5s SIM in it. That’s probably not the write way to do things.

You need to setup your phone as if it were a new device, per the “Let’s Get Started” directions and the att.com/Activations site. When I started the process AT&T showed me my iPhone 6 IMEI number and the SIM/ICCID number for the new SIM card. I turned off my iPhone, did the Activation on the web site, inserted the new SIM card, and turned on the phone. Everything worked — even iMessage (to be safe consider logging out of iMessage with the old SIM then activating again with new SIM — but I didn’t run into problems). 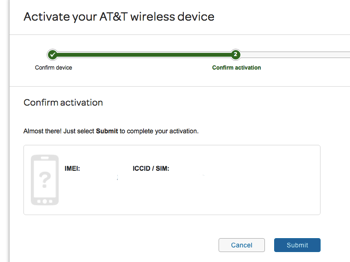