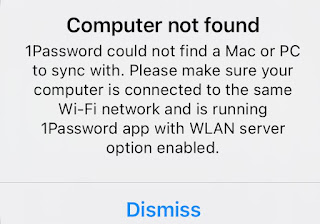 WiFi sync is deprecated and unsupported now, but there is still a troubleshooting page. Check WiFi, restart everything, restart router, toggle WiFi sync on/off, etc. That usually works, but this time was different. Nothing worked.
I'd just replaced my iPhone 8 with an iPhone 13 Pro, so I had a hunch what was wrong. [1] There was something broken in the authentication process between my phone and the MacBook running the desktop version of 1Password. I needed a button that said "reset authentication" -- but that doesn't exist. I could delete 1Password and reinstall, but it had been a few weeks since my last sync. Who knows what I'd changed. I didn't want to lose everything.
This is what I did:
It's not quite as simple as that. I had to quit and restart 1Password a few times. At one point 1PW for iOS was only showing me sync options for Dropbox! Somehow, after some restarts and tweaks it seemed to sync. Did it all sync properly? I have no idea. For now it's no worse than it ever was.
Once Apple Passwords get the notes feature (holds secret questions) we'll migrate to a hacked together approach of Apple Passwords and a shared Secure Note and I'll finally be done with 1Password.
Update: looks like the process lost my authenticator codes.
[1] I dread iPhone swaps. I try to do them no more than every 5 years. All kinds of pain happens.
at Sunday, February 20, 2022