Managing multiple Apple Store Apple IDs in Monterey: how to sign out and thus change default Apple ID for app update and purchase

There's a lot of complexity in Apple's software, but my nomination for the ultimate complexity is the web of undocumented and slowly changing rules and tools around Apple's Digital Rights Management (FairPlay) including rights to use media (music, video) and software (apps) for both individuals and family members.

I don't think anyone truly understands it all, not even Apple's senior developers. Sometime in the past decade Tim Cook said he'd fix the Apple ID problem and then things went silent. It's a nightmare. I remember when changing a phone number associated with an Apple ID could switch the ownership arrangement for device history (presumably a matching problem between disparate databases).

My most recent experience with this was trying to fix the default Apple Store Apple ID used to for Mac App Store DRM on my wife's Air Monterey account. It was defaulting to an Apple ID we used to share for iTunes purchases 10+ years ago. I've been slowly disentangling it for 4 years now and the rules change with each macOS/iOS release. Currently there's a bit more tooling to sort out who owns what on a Mac but it's obscure.

As far as I can tell the controls for this are now hidden in the App Store app. That kind of makes sense, because the rules (and Apple's DRM contracts) for movies/TV, music and apps are all likely different. You have to go into the App Store app, which can show the apps associated with multiple Apple IDs, then you have to sign out from the menu: 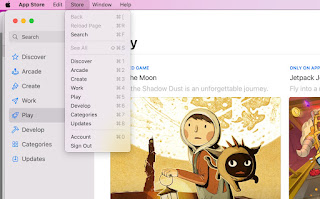 After signing out the default account for App Store purchases was her Apple ID.
Her Music account seems to be based on her Apple ID, but I didn't check to see if changing the App Store Apple ID changed that too. It would make sense if Apple were to have separate rules though.
I think the complexity of Apple ID DRM may be one of the reasons Apple never provided a multi-user iPad for families. (Our shared iPad has its own unique Apple ID but is a member of our family sharing.)
at Monday, September 05, 2022