I'm putting this up as a peacekeeper. I hope one day I'll fill it in better, but if you are trying to migrate from a shared Apple ID to each family member having only one Apple ID for both iCloud services and media then you will welcome any information.

First, see my prior post. I'll continue with this convention:

Let's say my iCloud Apple ID was "Sam" and my Media Apple ID was "Linda". So my device Apple ID configuration was Sam/Linda.  After the change it was Sam/Sam.

I think the migration will more or less work. This is what I did so far, omitting errors and redirections: 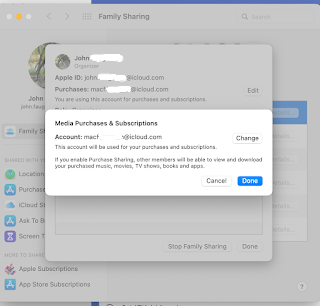 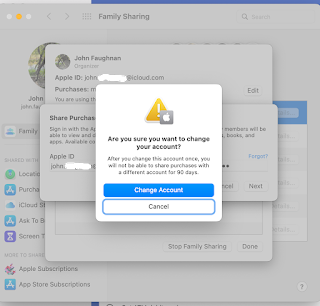 I ran into too many issues to enumerate. A few tips:
Extra comments
Update 11/15/2022 - the dreaded Apple ID for purchases".
Only my #1 son still had the "Linda" Apple ID for purchases (Store, Media). He's on iOS 16.1.1. Even after switching his Media Apple ID to be his iCloud Apple ID, and despite his Settings Family Sharing saying he had access to the Apple Music subscription, both iTunes.app and Music.app said he didn't have family sharing access.
I found https://support.apple.com/en-us/HT201454. There are 3 Apple ID settings in iOS, not 2. There's iCloud Apple ID, Media and App Purchase Apple ID, and for the Family Organizer there's also Apple ID:Family Sharing:Purchase Sharing:Purchases:Apple ID for Purchases! The last is not updated when a user changes Media Apple ID. It's a "secondary Apple ID".
I don't think the Apple ID for purchases always exists. On my son's phone it can be changed. On my personal family organizer phone it appears it cannot be changed and it's incorrect. There can be significant timing delays when it's changed, the Done button may appear not to work but on screen refresh it may work.
After I removed the secondary Apple ID for purchases from his phone he was able to access Apple Music. Then I could enable "Sync Library" in Music Settings.
Update 11/18/2022: Article on the secondary Apple ID and purchase sharing. This article changed 9/2022. It feels like Apple's attempt to mitigate the multiple Apple ID curse. You can only change this every 90 days. I changed it from "Linda" to "Sam" but in 3m I might change it back again -- after some research.
Update 11/19/2022
After doing the Apple ID separation I needed to recreate a Library for my son that identified what he'd actually purchased over the years that his purchase were on the family shared Media Apple ID. The Media Apple ID had its own account on one of our Macs, so I could create a Playlist from that to share, then open that shared url in his current Library. That worked pretty well in the end, but there were many issues and steps. I used many macOS Music app queries and sorts to reconstruct which things were his (He still purchases Music from Apple. That's a longer story.)
Once he had the Playlist I created open in his macOS Music app I had to select all songs and use "Add to Library" to actually make them part of his Library. Note you can download songs for a Playlist but that doesn't make them part of the Library. I needed his Library to reflect his purchases and preferences.
As a part of this process I found the best way to view purchase history was to enable iTunes in Apple Music, then in iTunes click the Purchases link.
Incidentally I ran into many UI bugs and issues with Apple Music. The worst is the insane and inexplicably persistent Apple Music product manager decision to use an enormous Playlist header section that makes the essential column browser very inefficient. There were problems with Authorizations, with downloads, with list row selection and more. It's just a buggy and flaky app. At one point I was trying to download locally and nothing happened. Only by showing the Activity window could I see that my device authorization wasn't working. I had to use my son's Apple ID to authorize Music / iTunes in his user account -- perhaps the Apple ID I first used had too many authorizations on it. There was no error message.
at Saturday, November 12, 2022