iPhone: status update and my apps 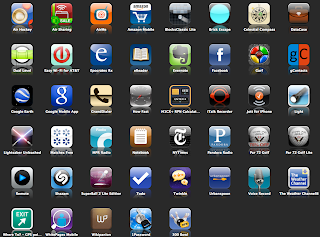 Gear Diary made a list of the types of iPhone apps professional geek bloggers use. I have many of them, with the exception that Twitter isn't useful for me and I've only now trying to see if there's something useful about Facebook...

On four different lists were:

And on two of the lists are:
eReader
Jott
Byline [jf: I use Google Reader]
Around Me [jf: I have Where To?]

My Apps are above, click to make 'em readable. This list, taken from iTunes, doesn't show my heavily used web apps (eg. Google Reader) and it includes a couple I no longer sync to the phone.

Google Reader is my favorite iPhone app - it's amazing. The Google Calendar app for our family calendar is another superb Google web app, then there's Google iPhone search, etc.

The games are for the kids (really) -- and they're invaluable in tight spots (my 9yo played one game during his flu immunization -- worked great).

So lots of good stuff there, but the bad news is that the iPhone sucks as a business tool.

I really thought it would be better than it is, but Apple has dropped the ball. No Calendar API to support over-the-air sync to Google Calendar, a complete lock-out on the cable which means corporate outlook calendars are a no-go [1], and, of course, no cut/copy/paste and truncation of longish notes/memos associated with contacts and calendars. (Oh, and I wish the phone had GPS compass capabilities, but that's a nice-to-have.)

I'm back to carrying around a very aged Palm PDA so I can get access to my corporate contacts and calendar. The only thing that saves Apple for me is that the alternatives are equally lousy.

[1] The only way to get a half-decent business access is to simultaneously use MobileMe for personal data (pathetic) and Exchange Server for corporate data (requires corporate IT approval -- fugget-about-it).

Update 1/5/09: A friend asked for some recommendations, so I've provided some more detail. Some of this duplicates my original post ...

I don't have Byline but since it integrates with Google Reader I'm considering it.

Then there are the built-in apps. The huge issue with the iPhone now is the inability to sync directly, or even efficiently, with Google Calendar and the lack of a Calendar API. That's bad enough, but Apple's MobileMe alternative is awful. (Corporate sync is a MUCH harder problem). Eventually people are going to figure out how big a problem this is. (Vendors are starting to deliver entire calendaring/task solutions that completely ignore Apple's built-in solutions and that sync with Google -- but these will only be coming out in the next few months.)

The other big missing app, which I suspect is due to a nasty conflict of interests, is that Apple won't enable any effective instant messaging client -- in fact they have failed to deliver a promised 'push/notification' API so they're foreclosing that entire domain of apps. They want, of course, to keep the huge SMS revenue they share with AT&T.

Update 1/1/10: Jott is now trying to do automated transcription instead of human transcription - obviously to save money. It doesn't work at all for my voice. So Jott is really just a voice snippet recorder now.
at Sunday, December 28, 2008

There are ways to sync w/ google calendar. I am. It's called nuevasync. Do a search, you'll find plenty.