Annals of the unexpected: My 2009 iMac runs better off an external drive than its original (cursed) internal Seagate

My ears are tuned to those sounds. I've heard them before, they never turn out well. Sure enough, Disk Utility showed a SMART failure. (Many failing drives pass SMART tests, which are pretty damned dumb.) Of course Mountain Lion should put this kind of thing up in the ^%$$# Notification Center -- but it doesn't.

This is what I found using Tech Tools Pro: 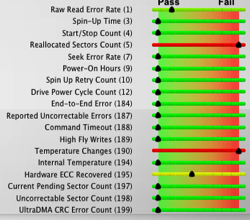 So I needed a new drive. I had prior experience to draw from. When the first of these wretched Seagates failed at 1.3 y, slowly and painfully, I did an out-of-warrantee Apple store swap for a new version of the same drive (that's how they do repairs).

Apple charged me $200+ ($40 service, which is a bargain, and $160+ for the drive which was excessive) to put this one in. I was later reimbursed when Apple extended its recall range. I could pay another $200+ to Apple, assuming they'd still service my 4 yo iMac (Apple only keeps parts for the past five years of machines.) Or I could bit the bullet, pay $650 for a 1TB Samsung 840 EVO SATA III SSD, and then pay $240 for FirstTech to work on the disgustingly unserviceable iMac (and fix the thermal sensor problem [1],[2]). With the SSD I'd probably extend the machines useable lifespan another 2 years, and I'd get far higher reliability. The latter is very important to me because I hate this sh*t.

I looked at other options, like just buying a new Mac, but I decided to go with the SSD for the reliability and extended machine usability.

In the meantime I used Carbon Copy Cloner to turn one of my many offsite backup drives into a boot drive [3] and put it in my Firewire 800 Voyager cradle. I then set Mountain Lion to boot off it. The original drive still showed, so I excluded it from Spotlight and Time Capsule then I used Disk Utility to unmount the internal drive.

The clone worked well, except both Google Drive and Dropbox complained about the change. Dropbox resynchronized, but I deleted by Google Drive files and downloaded a fresh set.

I then sat back and began to wait for the SSD. I figured I'd put it in a firewire enclosure and run off it for a few weeks before paying for the install. Test it out first.

Except something odd happened.

My machine is faster with the external drive than the old internal Seagate. Aperture in particular is significantly faster. I didn't expect that, though it is true that the 7,200 rpm ST31000528ASQ was an infamous dog in 2009. Maybe seek times were the rate limiting step after all. Maybe HPFS benefits from defragmentation after all.

Not only is my machine faster, it's also terribly quiet. The cradle is several feet away, and hard to hear. Without an internal drive the Mac fans barely spin. It's eerie.

I hadn't considered this option. There's not much downside; I have a string of firewire devices anyway so there's no new clutter. Repair and storage upgrades couldn't be easier.

Maybe I'll return the SSD. Meanwhile, if you have a 2009 iMac with a dying internal drive, I recommend running off a decent Firewire 800 external HDD and a quality enclosure. You may be quite happy and you can save some money and hassle. You'll also be adopting the "trash can" Mac Pro model of external storage early ....

[1] The original drive has Apple defined firmware that works with this iMac's temperature system. If it's not dealt with fans run full speed. Replacements don't have those. Since SSDs run cool many short out the Apple sensor, FirstTech attaches an Apple stick-on sensor and puts it on the drive.

[2] I could work on but I'd rather bug them about the dust that gets into the designed-by-demon-from-hell iMac screen.

[3] I have lots of backups, but not bootable backups. Going forward I'll make 'em all bootable. Not sure why I didn't before. Since the primary was still working it was easy to do this.

Post-migration I've had some odd problems with the "Desktop and Screen Saver" preference pane when invoked by Finder context menu "Change Desktop Background..."

Some of these problems could be Mountain Lion bugs but I hadn't run into them before. My first move was to run Onyx, often a good idea post cloning - but that had no effect.

Next, since this Preference Pane accesses the iPhoto/Aperture library, which has been problematicbefore, I tried rebuilding the Aperture database (cmd-opt start Aperture) while also running Console both with Aperture and with the Preference Pane. I found this entry:

'Christmas 2012' is an Aperture Project/Event, not an Album. I moved the images into a new album and deleted the old one. That cleared the error message. Note rebuilding Aperture's database didn't clear the bug, going forward I'll be using Console quite often with Aperture - a buggy app useable only by geeks. I also deleted my preferences

I thought things were smoother, but the delay still persisted. This time Console said:

no information back from LS about running process

This Console message has been reported when apps fail to launch. I believe LS means "Launch Services". That makes sense of course. I'd previously asked Onyx to rebuild launch services but I decided to give it another try. Alas, no joy.

Some mixture of Carbon Copy Cloner, Mountain Lion and perhaps Sophos Antivirus has taken my OS to a place I cannot follow. I suspect Permissions (cause I hate them).

It mostly works, but now I get

Sometimes Mission Control dies, and I get a weird variety of Desktop background behaviors and two tries to start the "Desktop and Screen Saver" preference pane.

Once I get the new SSD I'll set it up with a fresh Mountain Lion install, then try using Migration Assistant to move my user accounts over to the new system.