Using your Apple bluetooth keyboard with your iPad or iPhone: Unpair it first

A friend and I were debugging a Bluetooth problem with his iPhone 4S [1] and we didn’t have a Bluetooth peripheral to test with. So I tried using my iMac’s Apple bluetooth keyboard - but I couldn’t get it to show up.

It turns out there are some tricks to that, but my Google searches found mostly garbage [2]. The trick is you have to unpair the keyboard from your Mac before the iOS device can see it. The easiest way to do this is from your Mac’s Bluetooth Preferences. Click on the Keyboard icon, hit the X to remove it. 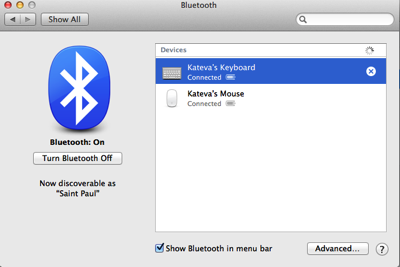 Now it will be visible. Once it’s paired to the iPhone I assume you’ll have to unpair it again — but I didn’t research that (we couldn’t fix his problem) [1]. It’s easy to associated an unpaired keyboard with an iMac, just shows up in the Bluetooth prefs. (But if you do unpair, it’s nice to have a USB kb around just in case).

The other way to do this is Force Unpairing. Search is always easier when you know the answer, I found this well described in a Mark Wagner post:

The Mac unpair is faster and smoother, but Force unpair is a nice trick to know.

Once I knew the answer I found some good references on this topic. Note that the best references are either from Apple Support or from quirky individually produced blogs that you’ve mostly never heard of. Which has to do with why Google search sucks now [1]. They all do a good job saying similar things:

[1] Reset Network settings didn’t work — I think his old Flash memory has some bad spots. A wipe and restore might do the trick. Maybe I’ll write about that.

[2] I have a theory (of course) about why Google’s search now sucks and why Microsoft and Apple could change the game — if they want to. Maybe I’ll write about that - it’s kind of a fun ecology and AI story. For now, restrict your Google searches using the “site:support.apple.com” operator and/or site:superuser.com and/or site:http://apple.stackexchange.com/ or create your own Custom Search engine. I’ve added some of the above link sources to my own custom search engine for Mac searches.