Facebook has once again taken another small step to making it more difficult to sort one’s News Feed by time (most recent). On their premier platform, Facebook.app for iOS, they’ve pushed the “Most Recent” option down into an obscure “more” setting, under “Feeds”. On the web app it’s moved to a drop down on the left side (News Feed) and always reverts to “Top Stories”.

My friends are upset. They want to see Feed items by date. Almost everyone does. So why does Facebook do this? And what can  you do about it?

Facebook does this because they feel a desperate need for growth. They’re so big they can’t grow by adding bodies, so they need to extract more money from the bodies they have. They have a few ways to do this, but they seem particularly keen on charging Page owners (Ex: Pepsi Cola, Minnesota Inline Skate Club, City of Saint Paul, Avalon Charter School [1]) for Top Page status. If you think about it, this means users cannot be encouraged to sort the Timeline by date. If we were able to sort by date, there’d be no incentive for Page owners to Pay to Play. [2]

So it doesn’t matter that most users prefer to sort by date, the Top Page sort is here to stay. We might as well get used to it.

So what can you do?

Well, you could switch to Twitter. Except Twitter’s share price is looking ugly. Their user base is flat and increasingly old. They stick ads in the stream now, and that’s only going to get worse. Then there’s Google +, but then you’d join an entity so Evil it makes Facebook seem the soul of innocence. Besides, when GooNet goes sentient you’ll be the first to be absorbed (by a few milliseconds anyway).

Or you could sign up with App.net, the elite version of Twitter. A calm culture of mutual respect, free of ads or commercial exploitation, sustained only by membership fees. That’s where I hang out. Too bad it’s now post-mortal (on life support, though we believe in resurrection).

So you can’t leave. What can you do to make the News Feed less annoying?

First of all, unlike all the Pages that you don’t love [3]. When they’re gone the Top Stories are more likely to be ones you like, and they’ll be sorted roughly by date.

Secondly, if there are people or non-profit Pages (the non-profit bit is important) you do want to see, be sure to “Like” their stuff. That brings them up on the News Feed; you feed now behaves more like Most Recent.

I think Facebook may also use relationship information in their Top Stories algorithm (it changes!). It’s probably worth telling Facebook who you care about - their posts may (for now) show as Top Stories. If you visit someone’s FB home in the web app, you can change “friends” to “Close Friends”. If you’re a real guru you can find the special Friends List and Family List and add names there.

Ok, so far so good, but now it gets interesting. [4] In the original version of this post I didn’t distinguish between Liking non-profit and for-profit Pages. Later, when I thought about this more, I realized the most obnoxious feature of my News Feed is that it’s now infested with for-profit Pages that my Friends “Like”. (yeah, lots of Title case concepts here). It’s diabolically clever [4]; everything a Friend of mine Likes turns into a Top Rated de facto ad in my Feed disguised as a Friend item. It’s as though my Friends had been captured by evil brain-eating Fungi (I love eco-econ.)

So given this new move by our friendly Facebook Ceti eel [5] is there any hope left? Well, we do have to remember that Facebook doesn’t really want to kill us. It just wants all our money. So there are ways to manage this as well. Most importantly, we shouldn’t ever Like for-profit Page posts unless we want all our friends to see them as ads. So in addition to Unliking for-profit Pages that you personally don’t love, you need to avoid Liking the posts of the Pages you do love. [3]

Think of this as a (hah-hah) little game we play. For Profit (sponsored) Pages are … dangerous. Like these Pages carefully, Unlike often, and never Like the Posts (unless you want to be a Ceti-eel).

Additionally, for the keen gamer, there are things one can do to get rid of some of the Friend-masked ads. In Facebook web you can tap on the the inverted caret next to the “Like Page” button and hide the source as though it were an ad — because it is. 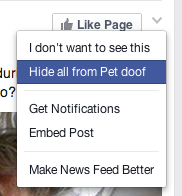 On the iOS app it takes more taps. You start with the inverted caret, the “I don’t want to see this” and navigate taps until you get the same sort of “hide all”. Fun!

[1] Facebook /web has a Pages Feed. You’ve probably never seen it, but that’s where you can find all the Pages updates that don’t make it into your timeline. I love my Pages — nonprofits, city government, clubs, bicycling advocacy. Great stuff.

[3] This is what’s known as an unanticipated or perverse consequence. Facebook certainly doesn’t want you to Unlike Pages or stop Liking sponsored Page posts. Tough on them, but they’ll evolve an adaptation.

[4] I’ve revised this from my original post; the more I thought about this topic the more interesting it became. Facebook’s user relationship are a great example of 21st century eco-econ - an uneasy relationship that veers from mutualism to parasitism. Facebook’s diabolical machinations fascinate.

[5] Intestinal parasites have been used to treat inflammatory bowel disease.

[3] additional note on unliking the ads they pretend are posts. They choose these based on your interests. If you tell them you don't like them, they kill off the ones that are on topics you are interested in and replace them with worse ones.
It doesn't actually reduce the number, just makes them even more annoying.

You're right Skater. I realized this too when I thought about it a bit and I've revised the blog post.