On the eve of a big road trip my daughter’s 4S was unable to sync more than four movies - despite having 15GB of free space. As is customary with iTunes sync failures, the process completed without an error message (there are no system logs for iTunes). Despite the lack of any error notices, on the iPhone only 4 movies appeared.

When I used iTunes to view iPhone contents I saw several movies with dotted circles and faded fonts - signs of an incomplete or corrupted transfer. I couldn’t sync tv either. It looked a bit like this: 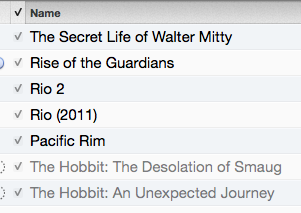 I tried all manners of fixes to no avail. Finally I wiped the phone and restored from backup — but the behavior persisted. An Apple Store hardware diagnostic didn’t show any problems or error codes.

When I wiped and restored as a NEW phone I had no problems syncing movies. So the problem was being propagated in my backup.

I really didn’t want to set her up as a new user. Lost game data, lost local files, lots of configuration…. ugh. So as a last ditch measure I switched from backing up to iTunes to iCloud backup. Then I did a wipe and restored from iCloud backup. Which worked until it got to installing apps and media, then told me I had to do that from iTunes.

After this two stage restore, from iCloud then from iTunes, I could sync movies normally.

I still suspect there’s also something wrong with the phone’s hardware, but for now it’s working normally and it does appear that a serious defect was being propagated by the iTunes backup — but not an iCloud backup.