I’ve been waging a desultory war on a Google Chrome Mac Update Error 12 bug for years. I can’t remember when Chrome updated itself correctly on my Mac, but I didn’t really dig into the bug. I figured Google would fix it sooner or later, in the meantime I’ve been manually downloading Chrome installers every few months (not a great idea obviously).

Today I gave up on Google and started work on the bug. The key to finding the answer was logging into my admin account, starting Console, clearing the log, then watching what showed up as I started Chrome and opened the About screen while Chrome tried to update and generated the usual error: 12 message. I saw something like this:

Searching on that string I found an old AskDifferent post on a related topic. That pointed to

where, like Daniel Azuelos, I found these file dates.

The fix is to quite Chrome, delete  /Library/Google/GoogleSoftwareUpdate (root Library, not User), reinstall Google Software Update Installer and restart. Then you get something like this:

Then, still from my Admin Account, I ran Chrome and stepped through several versions of the Chrome About screen: 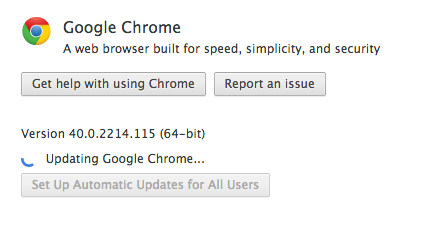 Do the relaunch, then .. 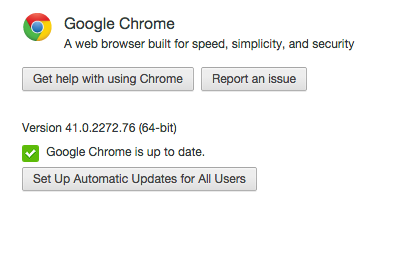 Setup up Automatic Updates for All Users (I’ll be impressed if this actually works!): 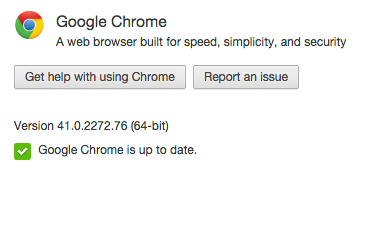 First automatic update in my memory.

Once I’d fixed the problem I read Google’s tech support note more carefully (with Mavericks/Mountain Lion their sudo instructions only work if you run as admin, they kind of left that out). This is the relevant bit:

Run the following command. Be careful to enter the command exactly as written:

The second is closer to the real fix, but look back at 2012 files. There’s no Install.py file there. The answer was to delete parent folder in /Library, not to try to run a non-existent installer.

PS. MarsEdit image upload really needs a lot of work. Hope the new competition from Blogo will help. Also, this is relevant.

Great to hear. This was a hard one...

Oh, thanks, I spent three year with this stupid bug!
Google your are crazy!

Thanks, you made my day!

My long search for a solution this problem is finally over :)

Interestingly, the dates on my files were EXACLY the same as yours.

How do I reinstall Google Software Update Installer?

Thanks very much for the tip! I deleted the /Library/Google/GoogleSoftwareUpdate folder, downloaded the newest version of Chrome and installed it. When I first launched it, I went to the "About Google Chrome" and checked "Update for all users".