How Apple's Music.app broke shuffle in iOS 9.2 (and how to unshuffle your classical music album)

With Music.app in OS 9.x Apple effectively made “shuffle” the default way to play an album or playlist. That’s not necessarily bad, but where they went off the rails was they gave one icon two very different behaviors. To explain how to shuffle I have to explain what they did

This is the problematic icon:

On this screen, which is what you see if you tap the new default wee summary screen that shows when music is playing, it behaves like a toggle: 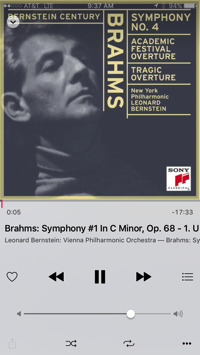 That is, if you see this screen, you can turn shuffle on or off by tapping on the shuffle icon. It’s a toggle. The color change is too subtle, but if you squint you will see it. Of course this means you have to start playing a song to change the shuffle state and then you have to go back to the album and somehow start over. Very weird. Really only makes sense if you’re in the middle of a playlist and for some reason you decide not to shuffle any more. Why would anyone do that? 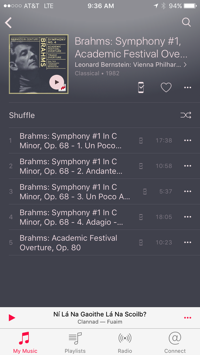 Do you see our old friend the Shuffle icon? It’s mid-way down. It even has the word Shuffle next to it — a convention that appears nowhere else in Apple’s iOS user interfaces. Except it’s not our old friend. in this context “Shuffle” is not a toggle. It means “start playing what’s below — shuffled”. There’s a control that means “start playing what’s below — not shuffled”; it’s the small pink play arrow that appears above Shuffle (sometimes I think it doesn’t show, but that’s probably a bug. Stop what’s playing and return). This other control actually is a toggle, between play non-shuffle and pause.

So on this screen, to recap, there are 3 functions, play non-shuffle, play-shuffle, and pause. The functions are distributed between two controls, one a toggle and the other an action button, and the action button uses the same icon as a toggle control that appears on another screen.

[UPDATE: If you are in the context of a list, as when you select an album or playlist, and your are not in shuffle-mode, then if you select the first item on the list play will continue sequentially until the list is completed. This behaves the same way as taping the Play icon on the Album Art image when no item is selected.]

Yes, there really is a horror movie to be made about Apple’s software development post 2010.

Incidentally, here’s the official 9.2 user guide as of Dec 2015. They don’t even try to explain this. Smart move. 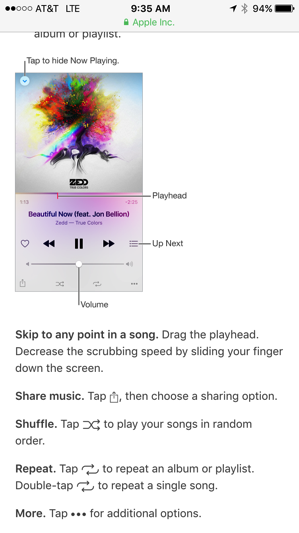 I'm currently writing a post about the many different ways to go "back" on iOS. I feel your pain.

When did Apple stop doing UX design and testing? And why does everyone just ignore how bad it is now?

Apple's UX failures get a lot of discussion in the geek blogs I follow, most famously in a Marco Arment post from Jan 2015:
https://marco.org/2015/01/04/apple-lost-functional-high-ground

Most of us trace the decline back at least 3-5 years, but as noted above I think the high water mark was the iLife products before 2007 or so. The decline definitely began in the Jobs era. I wonder if he lost someone he relied on, as far as outsiders can tell he set the direction.

It's a good question why this hasn't made it to the mainstream press. I suspect people like Pogue know it very well, but fear retaliation.

I'm looking at an iOS 3.1 device right now, and it has a Shuffle command at the top of every track list, just like iOS 9.2. Same icon, same text, same layout.

It also has the Shuffle and Repeat mode toggle buttons on the Now Playing screen, both of which have been staples of every music device since the first CD player in the 80s.

I'm having a hard time understanding how someone could not understand these long standing commands and UI conventions.

You might not be an expert in music software or music UI.

No little pink arrow here. So no help

Just updated my iPhone 6 SE to OS 9.3.3 in hopes this would fix the "shuffle all" issue with no luck; still no pink arrow, still have manually unshuffle toggle when song is playing, or start at first song of album. Can't get continuous play of several albums with song or worse, movements of classical compositions. So in this regard new update is no update. But thanks for trying to help, unlike previous comment from 3/1/16 10:23pm. Will check back again, hoping for a fix. As a long time Apple user and fan, thumbs down. - ludonbike