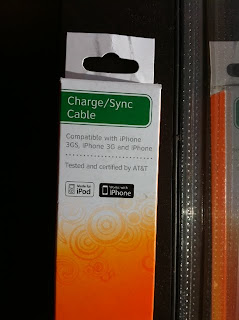 I've never come across an AT&T store bargain - until today.

Turns out AT&T sells their own iPhone/iPod/iPad charge/sync cable - for $10. As of today they also have a "buy two get one free promotion", so I bought 3 for $20.

Excluding obviously counterfeit $2-$3 cables (caveat emptor), I've not seen these cables on Amazon for less than $20. Griffin's powerblock/cable combo for $23 or so has been the best deal.