Audiobooks not showing in iOS 8.4 iBooks? That's because they're still like Movies used to be. Also, The Great Courses.

Decades ago I talked about a personal dementia prevention solution. A dementia test application would be hidden in the OS, but about once a year it would randomly launch. Once it appeared I’d have to complete it — or a lethal shock would be administered. Fail the test — get the shock. The shock would look like an accidental short-circuit, so life insurance would pay out.

I’m pleased to report that today we do have a dementia test, though we’re still working on the electric shock. The test, of course, is Apple’s iTunes and related iOS apps. If you can make them behave then you’re still a potentially viable worker; not yet ready for the Soylent factory.

I gotta admit, things are getting a bit worrisome. For example, today’s audiobooks adventure. It started when Emily decided to pick up some lectures from “The Great Courses” (which we once new as the “Teaching Company”, indeed that’s still the corporate name). We started listening to these about 25 years ago, playing cassette tapes while driving our Mazda 323 cross-country and spritzing ourselves with water spray (no air conditioning).

It’s been a year or so since we bought from them — these days I mostly listen to In Our Time Podcasts [1]. We got one of their 80% off flyers [2] though, and it was hard to resist tormenting the kids with automotive education. So we bought a few. The distribution is a bit complex — DVD or CD (for most lectures you really only want audio, but we did DVD for the $40 photography class) or “Windows” / “Mac” files [3] and (usually) supplemental streaming.

What they don’t mention is that many of their lectures can be purchased from iTunes for less than the CD or audio file download costs in iOS friendly Audiobook format. That’s a lot more convenient than their other options, and cheaper too. So I bought two lectures that way, a short history of London (#3 and I are visiting in October) and Daily Life in the Ancient World [4].

That’s when the dementia test showed up. It’s been years since our last audiobook purchase (viz: In Our Time) and everything has changed [7]. It took a couple of Google searches to figure out that Audiobooks were now tucked away in an obscure corner of Apple’s brutally neglected iBooks.app. Some dungeon-chained Apple product manager decided they could be considered a kind of “Collection”. [5]

Okay, but I’d purchased them and they didn’t show up. Why was that? My Movies and Music and book-book purchases show up in iCloud. Why not these audiobooks? Google found me some documentation, the same team that decided an audiobook was a kind of “Collection” introduced an obscure control as an attribute of a particular Collection called “Hide iCloud Books” (even though these aren’t, you know, Books. Do you see a trend here?) 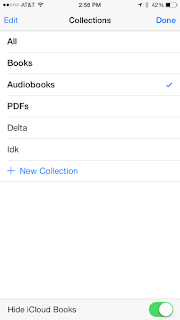 So I turned that Off, so they wouldn’t hide. That’s a double negative I guess.

Except they still didn’t show up.

This began to remind me of the old days, when we’d have one chance to buy music or videos and everything was managed and backed up using iTunes. Yep, it’s just like that, unchanged from 2013. Download to your phone, and it stays on your phone [6]. No iCloud joy, no freedom from iTunes, you need the old beast still.

Just audiobooks mind you. And, of course, it’s not documented.

Apple must be a desperate place to work these days…

[1] Still using Apple’s awful Podcasts.app. Podcasts.app and iBooks.app should chasten those who clamor for iTunes to be be divided into separate apps. Be afraid.

[2] Their pricing is a bit nuts — high list prices and large discounts. Do look for discount codes and the like before purchasing, though the iTunes audiobook prices are often quite reasonable

[3] Their audio/video file format recommendations are bit odd, but I didn’t have time to dig into it. Does Windows 10 still prefer wmv?

[4] I’ve chatted on app.net about writing a book that would describe a ‘day in the life’, from pooping to earning money to playing with kids across history and geography. So I’m looking forward to this one.

[5] Collections used to be sort of meaningful in iBooks, but that ended a year ago.

[6] Well, not quite. If you go to your iTunes purchase record, click on problem and say you had trouble downloading, the purchases are added again to the download list. I had my original purchases, but tried that as an experiment.

[7] Very much for the worse. Audiobooks had a large regression with iOS 7. iOS 8.4 is, in some ways, a partial improvement on iOS 7. Which mostly shows how bad iOS 7 was. Tim Cook has failed to rescue Apple’s long ailing software engineering.

[8] It no longer works to manage iPhone content from both iTunes and iOS. It never worked well, but these days it doesn’t work at all. iTunes can’t synchronize device and desktop states. So if you use Audiobooks, and you have any hope of sensible software behavior, you probably need to go all iTunes for media management.

Update 8/13/2015: Audiobooks not being synchronized to iPhone

I thought I was done, but the Audiobooks wouldn’t sync to my iPhone. That turned out to be a side-effect of an iOS/iTunes bug with photo sync from Aperture. The Aperture photo sync bug causes iTunes sync to silently fail (no UI indication) prior to Audiobook transfer. Removing photo sync let the process complete.