There should be a word for AmITheLastPersonOnEarthToKnowThis?

For years I’ve been puzzled by a lack of Mac tools for uploading to Facebook. Around 2013 or so Apple’s photo applications got that ability, but both Aperture and iPhoto have been axed (I still use Aperture, though I now avoid its native Facebook integration and iTunes photo sync). So it seems we’re back to where we started from; Photos.app doesn’t seem to have a native share option.

Except I missed this: Share on Twitter, Facebook, LinkedIn, and more — probably because by the time I adopt an Apple OS update my geek sources have moved on to the next one.

From the Finder, Photos.app, and newer apps there is a context menu share sheet extension similar to iOS, and it includes Facebook sharing. You can select multiple items and you can share to Timeline or a Facebook album. You can’t create a new album, you have to do that from Facebook. There’s no synchronization/album management (was problematic for me in Aperture anyway), it’s just an uploader. 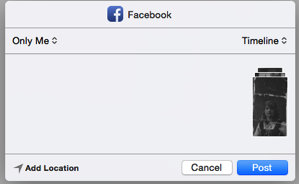 An appreciated uploader, because I’ve never gotten Facebook’s album uploader to work for me on a Mac.

In Photos.app you can’t share directly from a Shared photo stream, but you can create an album from the photo stream images an share from that. You edit your share options (Extensions) in Preferences.

Update: BEWARE - i thought I uploaded a test album as “only me” (as above) but on Facebook it was Public. Maybe I clicked the wrong target, but be careful…