Inspired by Peter C I've been experimenting with incorporating my Google Reader Shared Items feed into my Facebook stream.

I had a surprisingly hard time figuring out how to do this; I had to carefully read some posts in the "Google Reader" Facebook page (Peter explained it to me, but I didn't get it). Judging from those posts, I'm not the only one flailing about. The trick is the "settings" button beneath the "Write something" field on the "Wall". If you click it it a new area appears as below ... 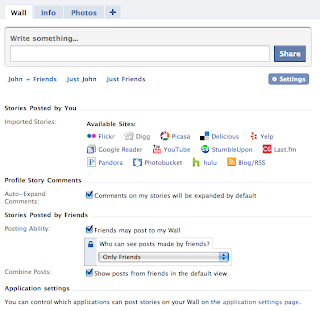 You can add any feed, there's a shortcut for Google Reader. I clicked on it, then opened my Google Reader Shared Items web page and copy/pasted that URL. The feed is first named with a long digit, but you can rename it to something meaningful. The long string of digits is the user name, don't change it. I share a lot of posts, so I was worried I'd overload my feed. So far, however, it's concatenating several items into a single transaction, like this ...

That's not too bad. I'll just have to track and see how the feed behaves. It's ironic that even as the power user desktop feed reader market dies, millions are consuming feeds via Facebook without any idea of what's behind the scenes.


Update 3/30/09b: Another set showed up. Maybe it updates once daily? That would be fine.


Update 4/19/09: It started updating several times a day, which was much too high a volume for my friends. I had to turn it off. The update behavior seemed unpredictable.


Update 4/25/10: I decided I'd try this again but link Facebook to a single blog. Alas, it looks like this feature was discontinued. I don't think there's a way to do this without an app of some kind. The most recent summary I could find on this topic was posted in mashable.com August 2009, but even that is out of date.

Facebook is all about lockin, so this type of functionality is going to be fragile. I suspect most vendors have given up. Twitter, for all of the things about it that truly annoy me, is not a lock in solution. (So sad that Google mangled Buzz.)

Looking around a bit, it feels like the action is in mashup services that deliver interconnection. One of these is "twitter feed", it connects any valid feed to a publishing service and it supports OpenID and OAuth -- so I don't need to give them my personal credentials. I'm going to look at what I can do with this.

I've only been able to get this to update by going back into settings and clicking update and that only works half the time. Now it doesn't show the stories anymore either, it automatically opens my google reader shared items page which I don't like. Very inconsistent.

I had to hunt for ages too, thanks for pointing out! Damn facebook makes everything awkward I find.

Yes, thank you! I looked EVERYWHERE! And the once a day updates were ok, but the multiple times a day - no not so acceptable.

Mine also doesn't seem to show up.

I would like it if it added it as a link.

Settings becomes options and no more donut for me...