At the very end of attempting to restore a 40GB iPhoto Library named “Current” from a Time Machine / Time Capsule backup I got this message [1]:

The Library “looked” ok, so I tried to open it: 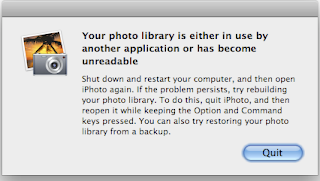 Since a backup is only as good as the restore, I pronounce Time Machine to be worthless [2].

I’m not completely surprised. The chaotic state of Time Machine/Time Capsule documentation is a pretty good indicator that the product is troubled.

I’ll count myself lucky this time. I discovered that my main photo library backup, containing about 10,000 irreplaceable images, was worthless.

How am I lucky?

I have two other backups, including a straight file copy that I’ve verified works. So I learned I couldn’t rely on Time Machine at the cost of a couple of hours of lost time. It could have been much worse.

I’m going to next test a restore of this library from my Retrospect Professional/Windows backup.

[1] For Google: “You cannot copy “Current” to the destination because its name is the same as the name of an item on the destination, except for the case of some characters.
[2] This error message could mean anything. Don’t take these things at face value. The fact that it occurs at the very end of the restore is curious. I did try a reboot but I didn’t try rebuilding because even if that had seemed to work I wouldn’t be able to trust that my image library was truly intact
Update 12/31/09: Retrospect Professional did restore my iPhoto Library, so it won this contest. Nice to know one of my backups worked! It does, however, deserve its reputation as insanely difficult to use. It was also exquisitely slow, though it's running on an old XP box and my backups are huge.
I did, however, find a clue that might explain the Time Machine failure. After I did my restore I discovered my "Pictures" folder had incorrect permissions. My user account had read-only permissions for the folder (why? no clue.). So I wonder if Time Machine tried to write something to the containing folder when it finished its backup, that failed due to a permissions problem, and then produced a misleading error message. I may try an experiment to test that.
Update 1/1/2010: My experiment concluded; the Time Machine restore worked. The bug is that Time Machine fails to check permissions on the target folder prior to the restore. It will attempt a restore that almost works, then fails at some critical last step. This problem may only show up when a Package is being restored into a Folder for with the user (and Time Machine?) does not have write permissions.
I filed an Apple Developer bug report: 7504890.
--
My Google Reader Shared items (feed)
at Thursday, December 31, 2009