Palm to iPhone - the summary 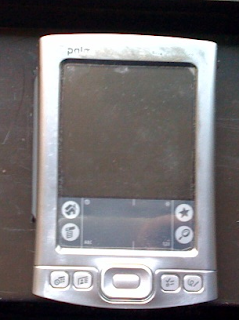 I'm wrapping up my series on migrating my personal data from the Palm/Outlook/XP to the iPhone/OS X/Cloud. I've yet to figure out how to manage my work data as well, that will be the subject of future posts.

On the left, a picture of my battered Tungsten E|2. It's my sixth or seventh Palm, and my second E|2. Like most Palm devices the on/off switch died within six months of purchase.

Palm can't make power switches. Or rather, they don't like them to last.

Note there are eight action buttons, four silkscreen and four physical (omitting the center button -- I hardly ever use it). Note the nice search button -- the iPhone doesn't have global search (maybe for a good reason).

Below is the current iPhone. Not coincidentally, the top row corresponds to the four physical buttons on my Palm. The special bottom row, however, is taken over the the phone, google, map, iPod. 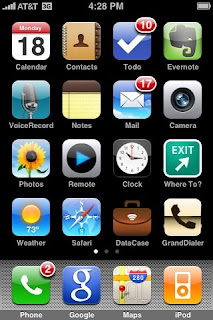 The Calendar and Contacts are a close match to the Palm. They sync with iCal and Address Book by USB cable. One improvemnet is that iCal also subscribes to my wife's BlackBerry/Google Calendar, so get to see her appointments on my iPhone (read-only). (iCal further syncs my primary calendar with gCal using Spanning Sync; I've put MobileMe on hold until Apple does some major fixes).

The ToDo.app doesn't sync with iCal, it syncs with Toodledo. My family Google Calendar also gets a feed from Toodledo, it shows tasks as all day events.

On the far right is Evernote, the anxiety provoking home for my Palm Notes and more. They sync to the Evernote service.

The following posts may be of interest to anyone who's trying to migrate a Palm device from Outlook/XP to an iPhone using OS X/Cloud ...

As a long time palm use, I had a lot of concerns about switching over to iphone and your site helped me a lot. After reading through your site and doing several days of internet research, these are the solutions I've stumbled upon for palm/pc users who don't want to purchase outlook to make the jump.

Contacts: a free trial of companionlink moved my contacts into google on the first try and only lost category info. I did have to download some windows updates first.

Calendar: moved into google by companionlink on the same jump. then sync'd with nuevasync (free app). they set up an exchange-like account that pushes new info from your iphone to your google calendar and vice versa.

All and all, these solutions have a long way to go to be the pda powerhouses of my old palm, but at least now i can enjoy my sexy iphone almost aggrevation free (i'm still working on memos).

I've looked at neuvasync. Figured I'd wait until they were out of beta. I don't mind paying if it works!

I do hear good things though.

I'd forgotten about companionlink. I'll take a look at them. Thanks for the tip.

We old Palm vets need to have a club or something. Maybe a secret handshake.

I miss the days of beaming an app from one Palm to another.

At least iPhones should be able to message (via SMS) a link to the Apple Store.

Hmmm. Sounds like a good idea for an iPhone App!