I'm a fan of Google Photos.

Sure, the next time Google's coin flips Evil side up my kids will appear in ads for laundry detergent. I get it; I'll delete my Google Photos then. I'm resigned to 2 year lifespans for Cloud services -- which is why I keep local control of things I care about.

It's not like there are good alternatives. Facebook? Many of my relatives don't use it. Smugmug? Expensive, can't do shared albums. Flickr? They've blown it so many times. Dropbox? I fear the end is in sight.

Apple? Seriously? Apple? Oh, I get it. You were pulling my leg.

So, Google. Among other things it means I can keep using Aperture for another year, hoping for better than (ugh) Photos.app 2015.

Uploading from Aperture is awkward though. There's no Export Plug-In, my old Picasa plug-in died when Google terminated its ClientLogin API last week. If I use the Google Photos desktop web UI I have to export to JPG from Aperture with a unique common string in the file names, upload all files, then do a search/create to put them in a Collection (album).

I'd rather use Google Drive. In theory I can create a folder in a special Google Drive "Google Photos" folder and export from Aperture to that folder, managing "albums" as file system folders. I can probably even use some Symbolic Link so the "Google Photos" doesn't use precious SSD space. Google Drive will do all the sync for me. Very nice -- in theory.

In practice, even though my non-Plus Google Photos service showed my Google Drive/Google Photos the albums don't appear. When I tried toggling the 'special folder' off in Drive settings the folder vanished from Google Drive (a problem if you're not ready for your photos to disappear). When I look at a different Google Photos folder through the web UI of Google Drive I see: 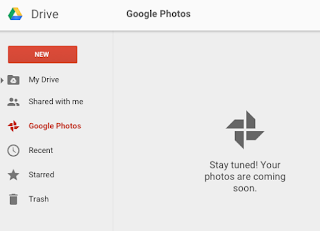 So be careful. I'll update this blog post if/when it works.

A day or two after my initial post there are two Google Photos links browsable in the web client view of drive.google.com and one Google Photos folder in my desktop Google Drive collection.

The Drive_Google Photos link above now shows a view similar to iOS Photos.app, or photos.google.com but without collections.

Within "My Drive", and also on my desktop Google Drive, is a folder called Google Photos that holds all of my Picasa photos organized by dates, not by collections/albums.

You can add folders and images to the "My Drive" Google Photos folder. They will sync like any other Drive data, but they won't show up in photos.google.com or Photos.app.

I've read you can move images around in Google Drive, but this does not affect images on Picasa/Google Photos.

If you delete images from Google Drive:Google Photos, however, they will be deleted from photos.google.com/picasa. (I probably deleted a bunch doing these experiments.)

So the only thing Google Photos integration with Google Drive is good for at the moment is getting a local copy of the images (but not the album organization) of your Google Photos/Picasa images. It's also a great way to unwittingly blow away all your Google Photos.

This has NOT been though out. I'm disabling Google Drive/Google Photos integration and I urge you to do the same.
at Saturday, May 30, 2015 3 comments:

SymbolicLinker service - if it doesn't work, look for an older install

SymbolicLinker is an ancient but handy OS X service that, sadly, is not in the app store. It’s handy for doing things like putting a Google Drive to Google Photos sync folder on a big external drive while Google Drive primary folder is on your SSD.

You can run it in Mavericks (probably Yosemite), but you have to “whitelist” it by using the Open command in the Finder Context menu.

I did that recently, but Safari still complained. The clue was Safari said the download as from 2010 … but I’d just downloaded a “fresh” (2011!) version.

Turns out I had one copy in Services folder at User level and an old copy at root Library (all user). I just had to delete the old copy.
at Saturday, May 30, 2015 No comments:

It's been a long time since I've said anything nice about Google. Maybe five years.

Today I must break from habit. Google Photos is amazing. I installed it on my iPhone this evening with Google credentials never blighted by Plus. It shows my Google Drive images (in Photos folder), all of my thousands of old Picasa Web images, and photos that are on my iPhone (via sync). The speed of display is amazing.

I browsed the collection from Google's web client (using Chrome) and created an album from images synced from my iPhone. I then started up web Blogger (MarsEdit is offline pending a Client login patch) and the album I just created appears in "From Picasa Web Albums".

From my iPhone I shared a different album to Facebook.

Now I have a photo sharing solution I like; one I much prefer to Apple's iCloud/Photos.app solution.
at Thursday, May 28, 2015 No comments:

Android users — it’s your turn to bask in the warm glow of smug superiority. As best I can tell Android provides good tools for tracking and limiting data use.

We in the sad world of iOS can only dream of such advanced technology. iOS can’t cap data use, and it has limited and clumsy tools for reducing data use — not to mention the mysterious iTunes Accounts data suck. The best we can do is periodically “Reset Statistics” and track from that.

If only Apple had engineering talent …

Ahem. In any event, this isn’t much of a problem when I’m in the US. The AT&T Next Plan has worked well for Emily and I — between a recent extra GB and 1 month rollover we use half of our 3GB and our monthly cost is down by 25% [1].

It is a problem when I travel to Canada though. I used to swap SIM cards, but that was a royal pain and Canadian cellular providers are quite awful [2]. So a year ago I started using AT&T Passport [3]. Once I’m able to find the mystery link on the AT&T site I pay $30 up front for 120MB and (this is key) unlimited texting. It expires 1 month after setup — no need to cancel it on return (don’t cancel it, see below).

The problem, of course, is managing the cap when you’re stuck using iOS [4]. Do try to remember to reset your stats and track those numbers. You can also get an idea of data use by phoning *3282# (free, I think) - that gets a data use text. Problem is that the Canadian carrier takes days to get usage data to AT&T. By the time that text shows 100MB of usage you’re probably over.

Bottom line - reset your stats if you remember, use the *3282# number and add 30%, use the limited iOS tools (esp. turn off email auto-check - I use Gmail.app when in Canada rather than Mail.app, don’t stream, turn off data roaming until you need data, etc), and expect but don’t worry too much about 30% overages.

Oh, and don’t think you need to cancel the program on return! That would mean when late fees arrive from the roaming carrier you pay full freight. You don’t get any discount for early cancelation and it will expire in 30 days.

[1] Yeah, I know about the subsidy component. It’s down even after taking that into account. At the moment I’m relatively pleased with AT&T. iOS data management deficits are more of a problem with the kids ultra-cheap low data H2O plans, but their devices are configured to minimize data use.

[2] You thought Verizon was bad? You have no idea. Think Comcast on meth.

[3] Confusingly this currently has very little to do with the oddly named “AT&T Passport app” - which has been useless for me.

[4] Now that Ive is shuffling off to England and semi-retirement maybe we’ll get less fashion, more utility?

If you do you may find it’s stuck there. We ran into this when my daughter’s school iPad had to be wiped and we needed to rescue Notes that were only stored on her iPad (school iCloud account doesn’t support Notes, neither does school Google Apps).

I did something similar with her school Contacts. Interestingly the account drag and drop behaves differently — Notes are moved, but Contacts are copied.
- fn -

[1] I took a look at the folder where Apple stores Notes.app data: ~/Library/Containers/com.apple.Notes/Data/Library/Notes. (Yes, the organization is bizarre). The data is in NotesV2.storedata-wal. I inspected the binary file in Mavericks [2] and found it contains text of Notes I deleted long ago. So if you had sensitive data in Notes.app deleting it won’t remove it from your Mac. It seems the file is never purged.

More — in Mavericks, it only looks like you can drag and drop notes to the desktop. It doesn’t actually work.

More — Notes can sort of hold images and rich text, in some Apple OS but not in others. Definitely not in Google IMAP.

More — Notes was implemented unsung an oddball IMAP hack. It’s like nothing else.

More — Like Contacts Notes can have Groups / Folders in OS X, but in iOS you can’t do anything with these.

[2] Yeah, I’m still on Mavericks. Yosemite has … issues. I’m waiting for a fix for the crazy network problem.