[I figured out what Apple was doing in the latest iOS Music.app mess. I’m leaving my original confusion in place, check for the last update.]

We don’t subscribe to Apple Music. That may be the problem. Anyway…

There used to be a way to tell Music.app to only show music physically present on an iOS device. That dialog moved around a few times. In iOS 9.3 it was very hard to find.

Google is no help. I see many people asking this question more or less clearly, but the answers are incorrect or missing.

As best I can tell “Downloaded Music” should show all iCloud music (so it’s a terrible misnomer), but on his phone it displays a gray banner saying “Showing only music on this iPhone”.

I think this is a bug, perhaps related to migrating from iOS 9.x with the old setting to show only local music enabled.

What an awful mess Apple is today.

Somewhere in the 10.1 beta some users Music Settings screen had a toggle for iCloud music. The released version of 10.1 doesn’t have this option… 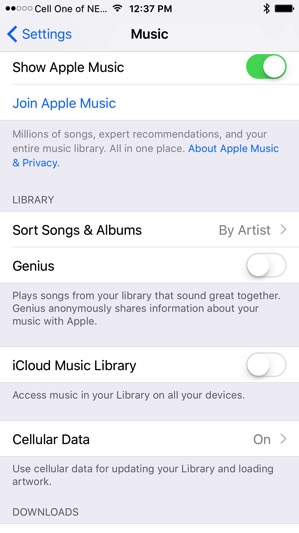 I have a theory as to what’s going on. In 10.x Apple removed the option to hide iCloud content. In the betas they played with putting a sensible toggle in a sensible place, but some evil marketing type overruled this.

Now when you start Music.app and tap on Library you get a fairly ugly looking UI that looks like this (I used the Edit option to add Genres, etc and to move Downloaded Music to the top): 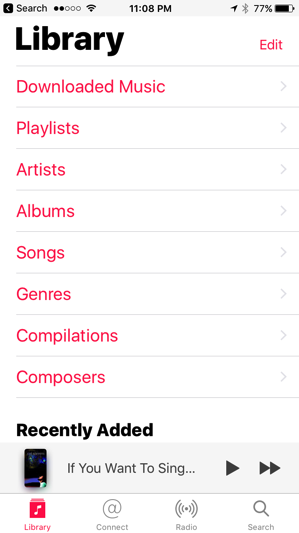 It should have everything that’s in iTunes and anything new should show up as Recently Added. From this screen you can find tunes and play them or transfer them locally (download). EXCEPT it can take an hour from purchase on another device until a tune shows up as Recently Added.

What if you want to see just music on your device? You tap Downloaded Music at the top of the above list. Then you get a screen with an ugly gray banner that says “Showing only music on this iPhone) — because obviously nobody knew what Apple was doing here… 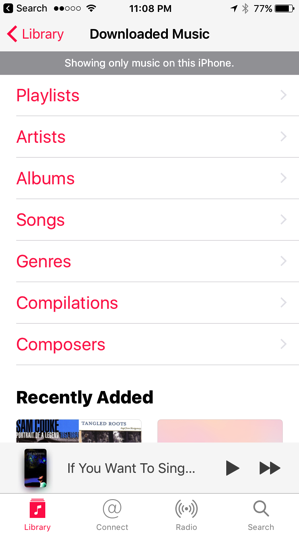 This is the locally stored music. The layout here matches whatever you did on the first screen. So if you only want to see local music you go here. There’s no way to eliminate the ugly gray barrier, it’s clearly a last desperate addition put here to try to make sense of a major UI shift.

They are suggesting two security measures that are new to me - a security key and password alert.

Security Key is a USB dongle (FIDO Universal 2nd Factor) Instead of running Authenticator.app on your phone. It’s less vulnerable to man-in-the-middle attacks, but “Security Key does not work on browsers other than Chrome.” You can buy one from your favorite Chinese manufacturer on Amazon.

Password Alert is a Chrome app that tries to monitor for man-in-the-middle and phishing attacks. I’ve installed it in Chrome on my Mac. You have to trust Google to use it but if you’re using Chrome you’ve already made that commitment.

The Password Alert extension was part of a series of 2015 security enhancements. I’m surprised I didn’t hear anything about it.

Security Key may be newer, I couldn’t find much about it. I think Google is going to have to start selling these. Why would I trust a Chinese vendor?