Coding Horror did a nice post recently on poor decisions in list sorting. He's a Windows programmer, so he wouldn't know about even worse list sort implementations by Apple's vaunted development team. 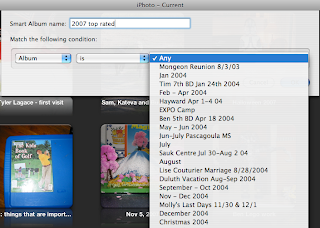 It looks completely random. Not much fun if you're looking for one of a hundred albums. The only saving grace is that if you know the album you want, you can type the first letter and navigate the list that way.

If iPhoto were smarter, and allowed one to include smart albums in the list, things would be even worse.

iTunes has much more powerful "smart list" (query) definitions that can include other smart playlists (queries) and here Apple did things right (actually, I think they quietly improved this in one of their recent updates): 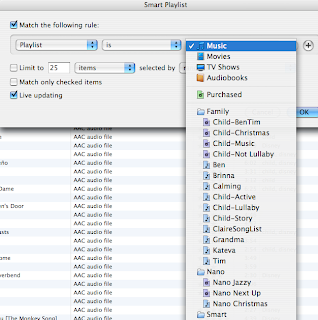 So Apple isn't completely hopeless! It's just that their talent base isn't unlimited.

That should make non-Apple developers feel a bit better.
at Sunday, December 16, 2007